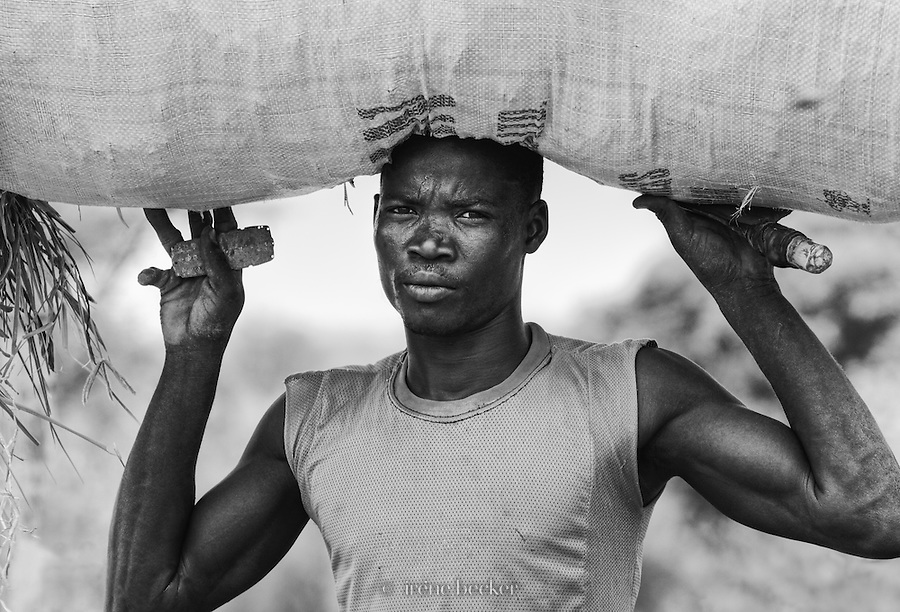 We grew up watching the TV series Suits, Boston Legal and White Collar. So forgive us, if we thought our first jobs would be in swanky offices that smelt of new currency. Earning a salary north of Ksh. 50,000 which came with a girlfriend who called me every morning to tell me she loved me.

Instead, I found myself in industrial area. Getting intimate with sacks of relief food at the UNICEF Warehouses. Intimate in the sense that from 8 am to 4 pm daily, we offloaded tens of 18 wheeler trucks. You simply got to the containers edge and a nice gentleman would put a 90 kg sack on your back and you would carry it into the GoDown. That was it, and you repeated this some 35 times within the day. A long line of men doing the work necessary to keep this country running.

It was thankless work. At the end of the day, you smelt like a crossbreed of a hyena’s carcass and Nivea body lotion. You’ve read of how men’s bodies glisten under the hot sun when they work. It is never that sexy when you are the one doing the grunt work. My mum was and still is a believer in hard work. She was born with a hatred of idleness. As a kid, when other babies cried to be let out to play, she wanted to work.

When I finished high school, in that gap year before you report to campus. I was kept busy doing everything and anything. Which is how I found myself in “Inda” short for Industrial area. My mum belonged to a woman’s Chama. They had set up the group to discuss ideas on how to raise capital and do business. Though the real purpose of the Chama was a lot less honorable. It was a platform for them to gossip without the off chance that anyone would judge them, somewhat similar to Facebook these days. I digress. Every time she came out of the chama, she had an idea on how to improve her life. Which usually meant making mine a little less pleasant. Case in point being when she took away my phone. You have to understand that phone was everything to me. She had bought it for me after form 4. It gave me a window into the social niceties that kids my age were partaking in. And of course, allowed me to keep in touch with my short little sweetheart who smelt like lavender coated chocolate double dipped in ice cream. I thought she loved me. She sent me my first nasty pictures. I loved them.

Her little chama questioned the wisdom in giving me the phone rather than letting me earn it. Apparently finishing school did not cut it. Plus, when she found Miss Lavender’s nasties on the phone…mama got angry. She decided I was too immature to own a phone. I disagreed. We got into a bit of an argument. The argument may have gotten a little physical to my detriment. She took the phone, and told me to buy my own damn phone from then on.

That was how me and the Tecno mobile phone with a full color TV and built in voice modifier parted ways. We laugh about it these days. Especially when she comes to visit me and the wife. The wife pretending to be a good woman worthy of her mother in laws respect. My mama and I pretending we do not know who the wife really is. We enjoy it I think, the pretense, for a couple of hours. We get to play another role. Mama reminds me of that job in “Inda” often. The job I took just to earn enough money to get a phone and maybe get some more nasties from Lavender. She says she knew she’d done well as a mother the first time I came home from that gig. Tired as hell, barely a man, but with the stubbornness to do whatever it took to get what I wanted (hello Lavender, I haven’t forgotten you. I went back to that job for the next 3 months. Too proud to quit and let mama win, and too broke to be okay with loafing at home with no money. I did finally get another phone, a nice suave Tecno mobile without the color TV. Lavender had unfortunately moved on by then.  I unfortunately did not have the monopoly on her attention or affections.

Tonight as I sleep I’ll think of the job. Of me hauling 35 bags of poorly packaged Pakistani rice destined for Kakuma refugee camp. I will not remember the smell of my armpits after work, the indignity of the Mhindi supervisor yelling at us like we were his dogs or even miss lavender’s nasties (partly because my wife can read my thoughts). I will remember the pride of that first salary. The pride it gave me to give mama some coins, and tell her “nunua mboga na hiyo.” I will think of you mama, that chama, and the pride a job give’s a man. And maybe, of Lavender’s nasties but just for a little bit.

I hope you enjoyed this little humouros story. If any of you work for Tecno can you tell them they need to pay me 😊😊😊😊. I accept payment via Visa/Paypal or Mpesa. Don’t  forget to hit like, comment and subscirbe. Welcome to my Channeeeeel

12 thoughts on “My First Salary”