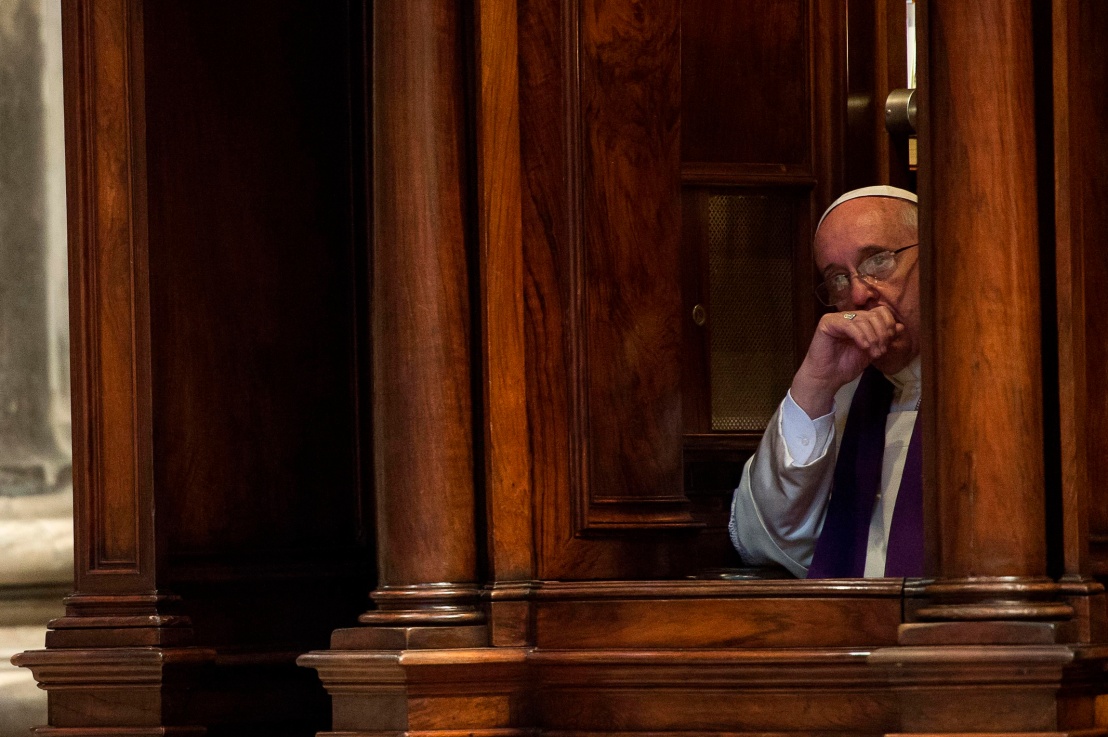 The priest enters the confession box and closes the door behind him. His parishioners are seated in the pews surrounding the box. Each waiting eagerly for him to hear their confession, and if he wills it, to offer them penance, forgiveness, for the sins they have committed that week. He is to them the embodiment of God the father, the son and the spirit, united in his flesh. He is bored though. He can predict with certainty the sins of his gentle parishioners. He wishes the bishop would send him to an urban center, where people sin more vigorously. At least he would have something to look forward to for his Saturdays, beyond hearing how one of his parishioners let his cows graze in his neighbor’s farm, on purpose. He wonders if his God minds that he is bored. He hopes not. He would not want to burn in the same fires of hell that he scares his people with. He sighs, it is time to begin.

He flicks on the light in the confession box, indicating he is ready for his first confession. Seconds later, the door opens. There is something different today, the person opens it with a level of urgency. As if he wants to be there, not just because his priest said so. The priest listens intently. It is a skill honed for decades, sitting behind the partition he imagines who the person is. Perhaps a woman, coming to confess her adultery, or maybe a man ready to confess his love for another’s wife. The person sits down heavily, it is a man. The women sit down daintily, like little daisies floating down a river. The chair is glad to receive the women, the men however, are a mess. The priest waits until he is comfortable. He can tell, once the shuffling is done. The priest begins, “Son, when was your last confession.” He adopts the airs of a father, speaking to an errant son. It is what he was taught at the seminary, he is after all the embodiment of God in this tiny village in Eldoret.

The man coughs. He is still not sure why he is here. He can see the silhouette of the priest seated just a meter from him. Separated only by a curtain. The priest is prohibited from pulling aside the curtain. He can never know whose confessions he hears. But he must know some of them, the sinners in this village are few and their sins unworthy of confession. The priest however, is growing old. He is interested only in doing good by his God. He carries his old age with ease but the years are showing. Death will soon be with him.

Kariuki begins, “Forgive me father, it has been 17 years since my last confession.” The priest lets out a gasp, unwillingly. In his books, this is a sinner standing in front of him. Kariuki does not mind. He expected it. The priest get over his shock and they continue. They after all, God’s children. He must love them as his God does. Kariuki asks the priest to let him make his confession in the form of a story. The priest agrees. It is about a girl. As all stories men tell are. The priest grows quiet, he does away with the courtesies demanded of confession and he listens to him as a man would listen to a friend. Silently, without scarcely a whisper.

“My  mother always insisted that she loved my father. Right after she slapped the daylights out of him. She said she just could not understand how a grown man could be so stupid. Her standards were high you see, no human could have achieved them. And he was a peaceful man, not prone to violence. He was the type to look the other way. You were never sure of his limits, they were seemingly endless. Yet, in the middle of all this I knew he loved me. He never said it. He was from that generation, where men did not speak of feelings and emotions. But you felt it, and I gleaned his love from his actions.

My mother on the hand was made from fire and pepper. She was always angry about something, and did as she pleased. Their marriage was a conundrum, a mixture of oil and water.

I never saw my father angry. Until the day he came home to find his wife naked, his friend huffing and me his son sitting in my cot, looking at the 2 lovers trying to figure it out. He stabbed her 13 times. The exact number of years they had been together. His friend was lucky, he escaped with his life. His scrotum however, was left on the floor. A stunning tribute to the anger of a peaceful man. They jailed him for it. For standing up to his dignity. He would later die in prison a year into his sentence. He missed her. And the rope had offered a tantalizing end to his misery. The last time I saw him, he told me to be strong. Whispering the words from behind prison bars, as if he knew I would need them.

I guess this is why I have always loved and hated strong women. They remind me of my mother.  She never really needed my father. And she made sure he remembered that daily.

You know the way they say we marry our parents…I married my mother. A shorter version yes, but she was in her character my mother without the physical violence. But she had the same knack, the same talent for using words as a weapon. The same spirited soul and an unending ability to spit venom when she spoke. I never knew where you stood with her. So when she agreed to marry me, I was elated. Her name was Zalika, Swahili for reborn. I thought it was a fitting name for a woman who would birth a new future for me…I was naive. People cannot give birth to your dreams.

She smelt like fire. Have you ever looked at a girl and in that moment you  knew. You knew she would break you and destroy everything you were. I saw and I knew, she was my mother reincarnated. In her eyes, I hoped to maybe make my mother love me, they way my father did. She never did.

Last week, she asked to talk to me. It was not really a request. I remember the way she said it. As if her words were a kindness she was showing me. I was never too sure. She wanted an open relationship. She said it in that tone that left nothing for discussion. It was her way of saying she wanted to leave. A kindness.

I said no, confident that she would choose to stay with me rather than lose everything. She left. But before she went, she kissed me, and suddenly I was 18 again. Having just kissed Nina. The little princess that my heart pined after then. Her father having threatened to eat my balls if he saw me with her again. I would have risked everything for that girl, Nina. Her father found out about the kiss. He snitched to my mum about it. They collaborated in giving me the most fire of beatings I would ever receive. I remember every time the whip landed on my back. I thought of her lips, they looked like 2 slices of freshly cut beef about to be deep fried. Her lips in mine felt like a fresh mango, that had had the time to ripen, served with blood red pepper. They hurt and pleasured me in equal measure.

So here I am, 2 children, the ghosts of my father and mother with me. My wife somewhere with the man of her dreams. Father, tell me what do I do?”

The priest sighs, he did not expect this. He stays silent for a moment, trying to figure out what wisdom to dispatch to the younger man. Outside, the other parishioners are getting tired. Their voices rising in conversation, a reminder that they are still here. He can tell the younger man is quickly approaching his breaking point. And we know the foolish things men do when they break. The priest wonders, if perhaps he will choose his father’s path. A rope, a stool and a desire to end it. They sit together, silent. Each unsure of the others thoughts.

The old priest reaches out through the partition. He knows this is one of those moment he will have to explain to his God someday. He clasps the man’s hands while keeping his eyes lowered. He holds them tightly, willing his spirit to connect with Kariuki’s. He remembers the last words Kariuki’s father spoke to his son. He knows they will be sufficient.

The priest whispers, “Be strong.”

Kariuki pulls his hands away, stands and walks quickly away. The words are enough. Now every time he feels weak, he will remember the priest’s hold on his hands and his father’s voice.

“Be strong, son. Be strong!” Maybe he will be strong a little bit longer.